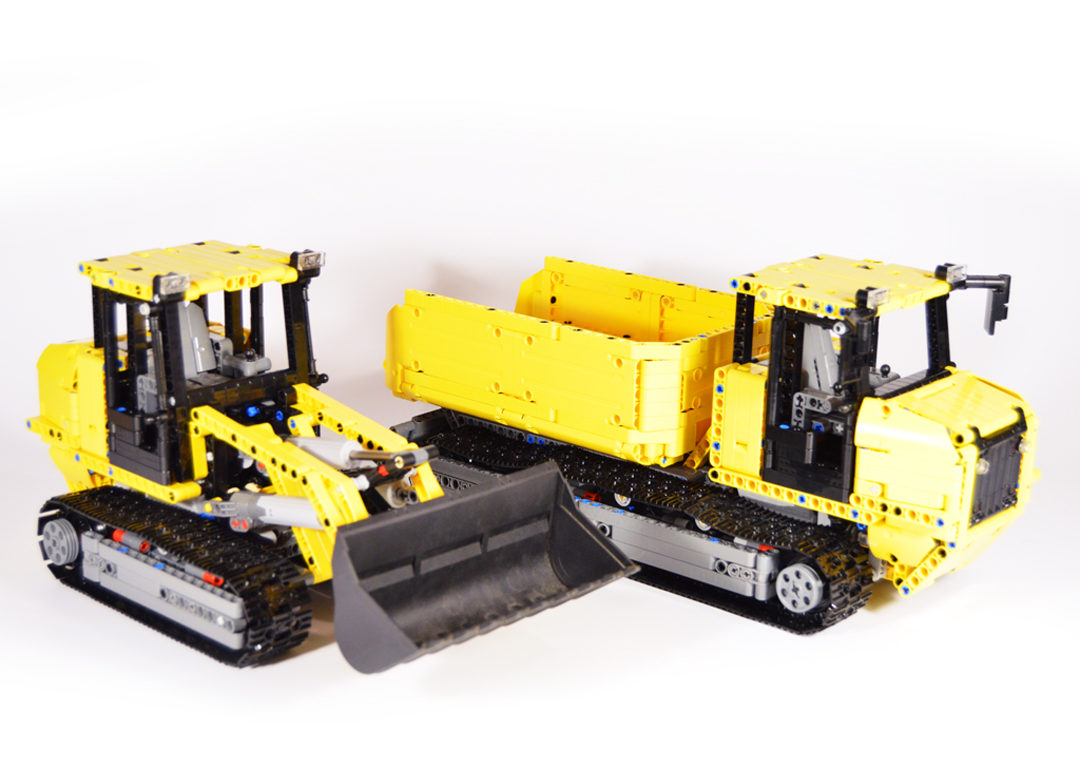 For my next creation I present you not one but two MOC inspired by CAT 963 tracked loader and Haddick Raupentransporter aka tracked dumper with the particularity that the two vehicles share a common chassis.

Beyond the many project stuck in my to-do list, one of the oldest project a weird looking tracked dumper known as the “Raupentransporter” (or “Tracked transporter”, translated from German).
It is a CAT 963 converted to a 30 tonnes dumper by the german company Wilhelm Haddick and Co. KG. The picture here below shows the general aspect of the vehicle.

The dumper reuse the same chassis and engine, but accomodates longer tracks and a reversed cabin. Typically it drives backward compard to the CAT 963. To make it a dumper, it has big tipper plus a plow installed on the reat (extended chassis) half.
You can find at the link here after some info on the real machine, in english: here

The modification of an existing chassis to build a second type of vehicle offers a good opportunity for a dual MOC. Let’s get started. 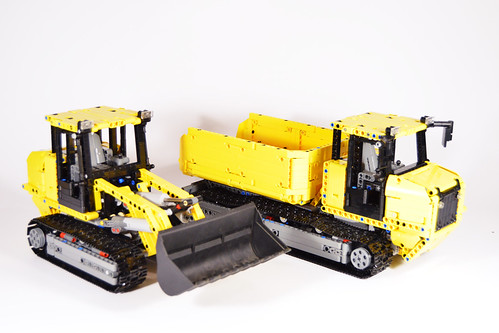 The general design of the CAT 963 (not a precise version) has been used as inpiration for the loader. 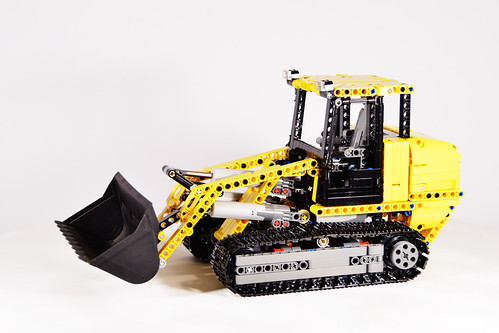 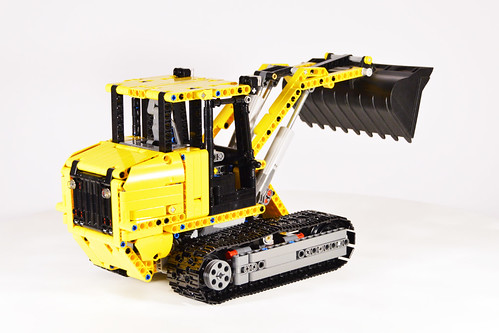 The two short independent tracks (one PF-M motors each) support the main frame.
The forward half of the chassis supports the main arm and two linear actuators (powered by a PF-M motor) raise and lower it. A linear actuator (also powered by a PF-M motor) actuates the bucket. The LA is a bit too long and can’t be extended at full lenght but a mini-LA should have been too short to do the job. It’s not perfect but it works. 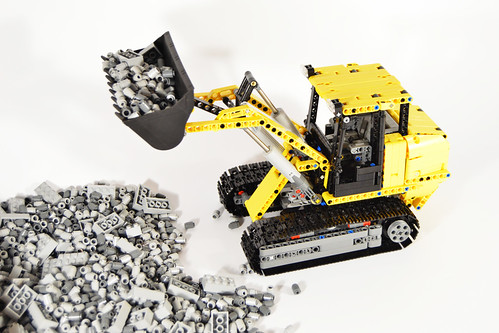 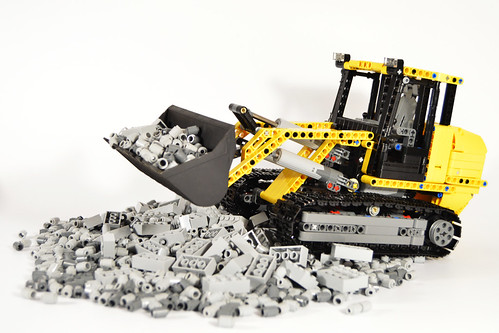 For the story time, this bucket is one of the oldest LEGO part I own. It comes from the Pneumatic Loader set 8459 of 1997 and it was the first “big” Technic set I ever had.
The cabin sits on the rear part of the frame. It covers the four PF-M motors under the driver’s seat. The cabin is equipped with operable doors and a open able hood which covers the Buwizz bluetooth controller.

Just like the real machine, the chassis of the dumper is a modificaiton of the tracked loader’s one. The tracks have been extended and the cabin reversed. The seat and doors faces the opposite direction but the general dimensions, aspect and roof remains unchanged. 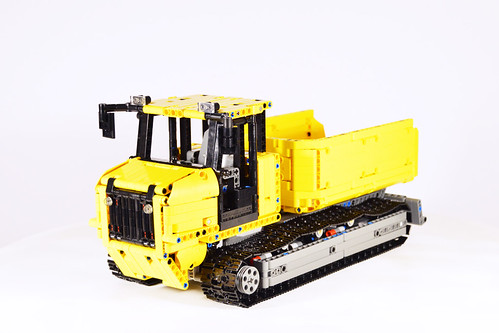 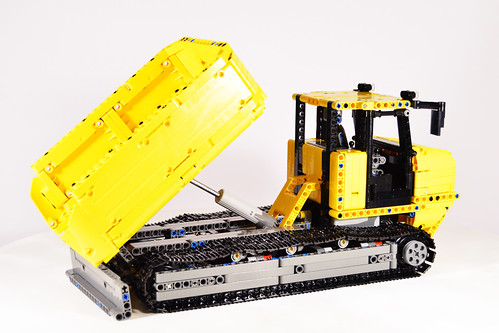 The hood remains unchanged and still covers the Buwizz bluetooth controller.
On the other extremity of the chassis is installed the tipper. The tipper doesn’t really look like the real raupentransporter but it has a too complex geometry to reproduce.

A single linear actuator (PF-M motor) actuates the dumping process. You can note that the position of the LA is absolutely not consistent with the real machine because the extension is too short to reproduce the real system.

The plow fits at the rear end of the vehicle and a single mini-linear actuator (another PF-M motor) actuates it. 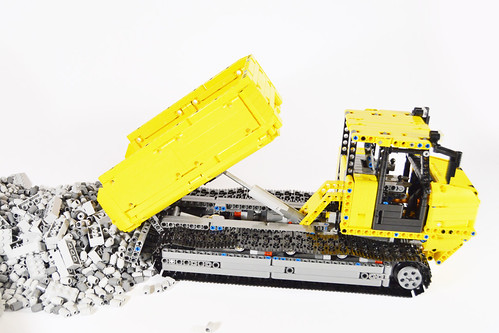 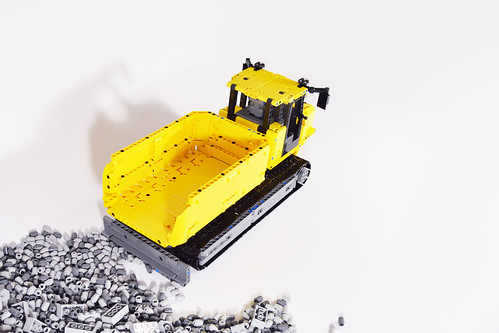 The re-use of one chassis and cabin/engine hood for two different vehicle is a good challenge. I’ve already done it with truck but is it the first time I re-use a tracked chassis.
The only real negative point I find is the height of the loader’s bucket and it is just enough to discharge in the tipper. 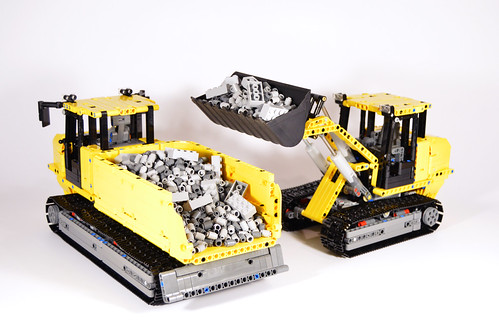 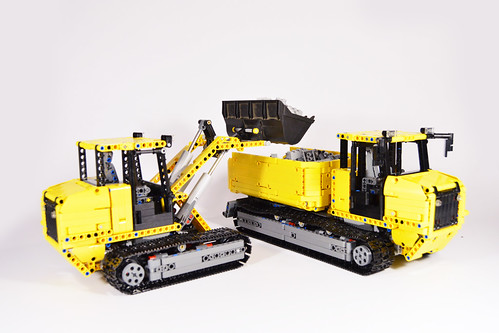 Thank you for reading!

One thought on “Tracked Loader and Dumper”