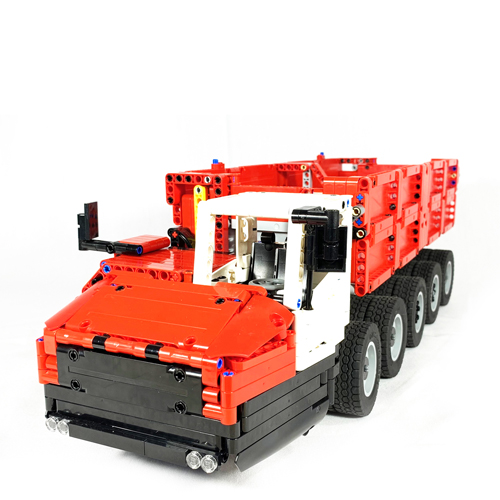 This is exactly what happened with the Toro Supra/Sandvik TH.680 in its first version.

Quick reminder. The Sandvik TH.680 (also called Supra when it was built buy Tamrock-Toro) was a 10×4 underground mining truck with a loading capacity of 80t. The size and weight of the truck was compensated by an incredible manoeuvreability thank to its 4 rotating axles.

7 month ago, I worked on the initial version. The plan was to use a RC-controlled pneumatic system to operate the tipper and doors. But a lot of issues appeared, such as the chassis that wasn’t stiff enough and also the auto-pump that couldn’t deliver enough pressure to actuate the jacks. After several iterations I finally removed the electric component and came back with a manual version you can discover here. And even there I wasn’t happy with the front part of the truck which does not reflect the real machine.

This new version is a totally new design and structure. There is absolutely nothing in common with the first one.

Let’s start with the chassis.

To simplify the design only the central axle is powered by a single PF-L motor (the real truck has both axle 3 and 4 driven). The motor is directly built in the chassis at the lowest point possible for stability. 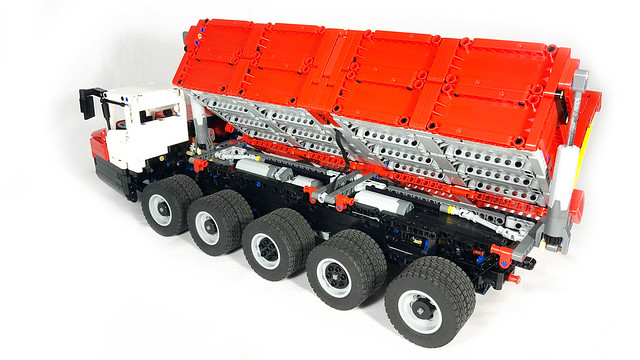 All other axle are rotating and are exactly the same, they are each mounted on a 28t turn table.

From a construction point-of-view, the rear end is the symmetrical built of the front end. One built-in servo motor actuates 2 turn table: no reduction for the exterior axle and a 3:5 reduction for the inner axle, this allows having a proportional (not perfect) steering and giving the MOC a great turning radius. 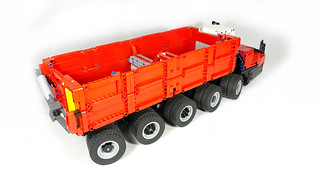 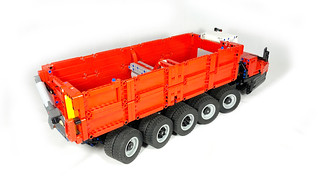 The side-tilting tipper is built as a separate modular part and can easily be dissociated from the chassis. It is equipped with one large linear actuator at each end for the tilting, operated by a PF-L motor installed next to the cabin. 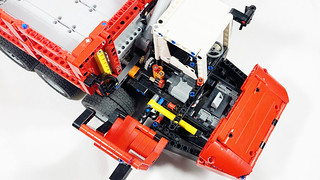 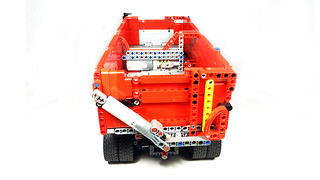 The lateral gates are operated by a single PF-M motor and a mini-linear actuator installed directly inside the haul. The linear actuator moves the lower door and a simple yet clever use of a liftarm moves the upper door.

Regarding the front end of the truck.

One of the points that bothered me in the first version was the design of the cabin/engine cover that, in my opinion, was ugly. I can only blame myself. 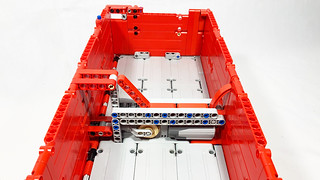 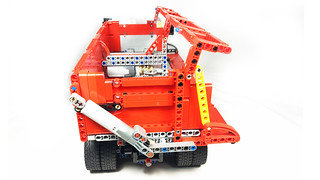 So it has also been reworked. The sliding hood, which is a feature of the real truck, remains and cover the Buwizz (insert link) controller brick.

The cabin has been enlarged and now accommodate a driver’s seat and an instructor one.

A tilting hood is also present and provides access to one of the L-Motor. 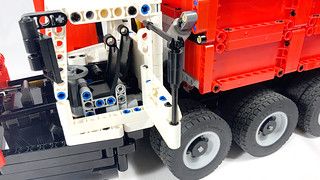 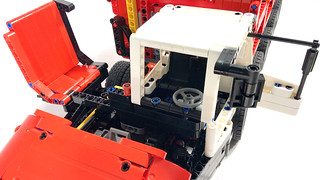 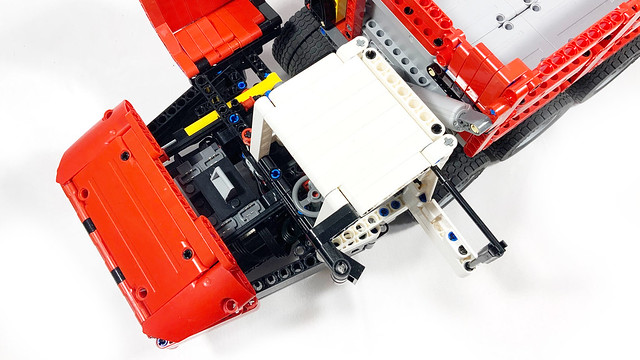 All the motors are powered using a single Buwizz controller with a custom profile.

Curious about Buwizz? Get your own on Buwizz.com

Using the RC version of the TH.680, I also took some time to make a step back and recreate a manual version, simply by removing the motor (and adjusting some design to accommodate the rigidity of the chassis).
This new-manual version is so equipped with linear actuator instead of pneumatic element, all manually operated.

Instruction for this version are available on Rebrickable, you can also buy the entire model (parts + instructions) directly through MOChub.