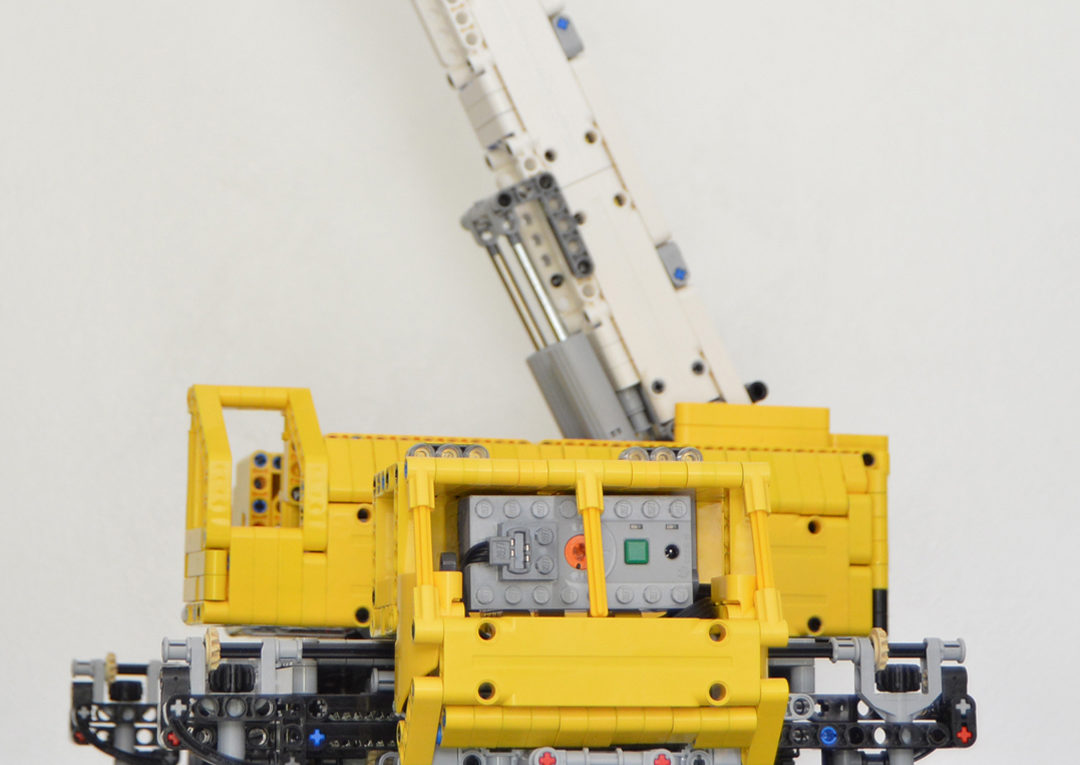 A few months ago, I have introduced here the Сокол-80M crawler crane – or Falcon-80M for an English translation.

It is a Russian crane of a 80t capacity with a single extension telescopic mast mounted on a lookalike tank tracked vehicle.

Another version (Сокол-80.01) exists but mounted on a wagon for railroad recovery operation.

This is almost the information I have about the real machine. 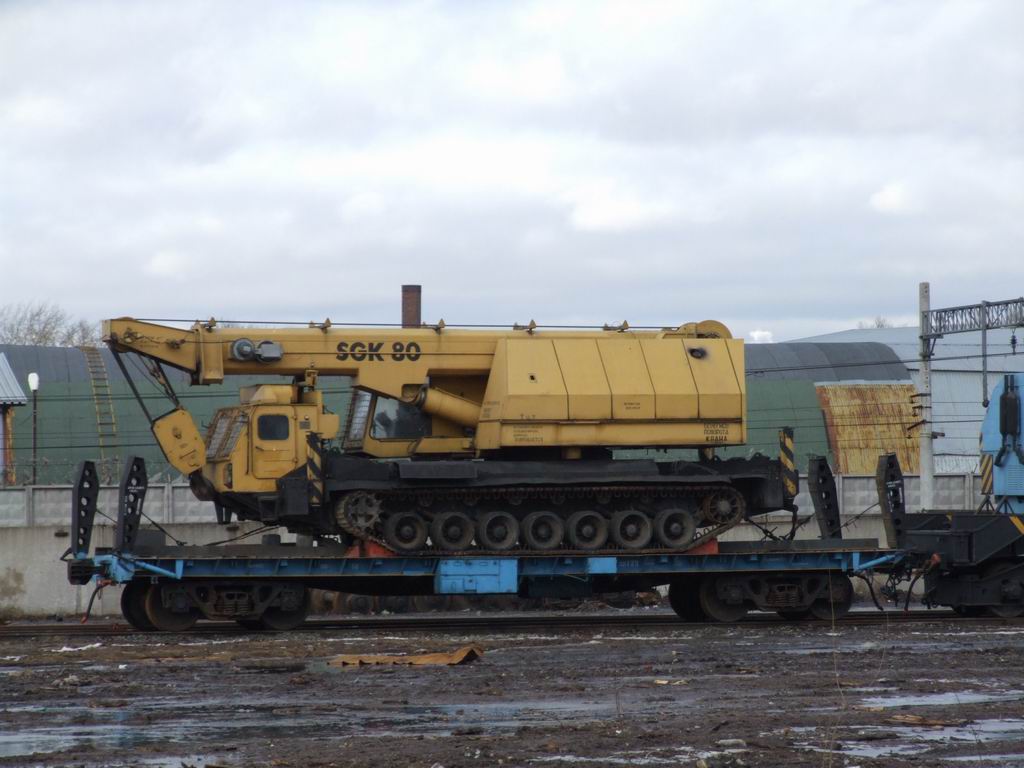 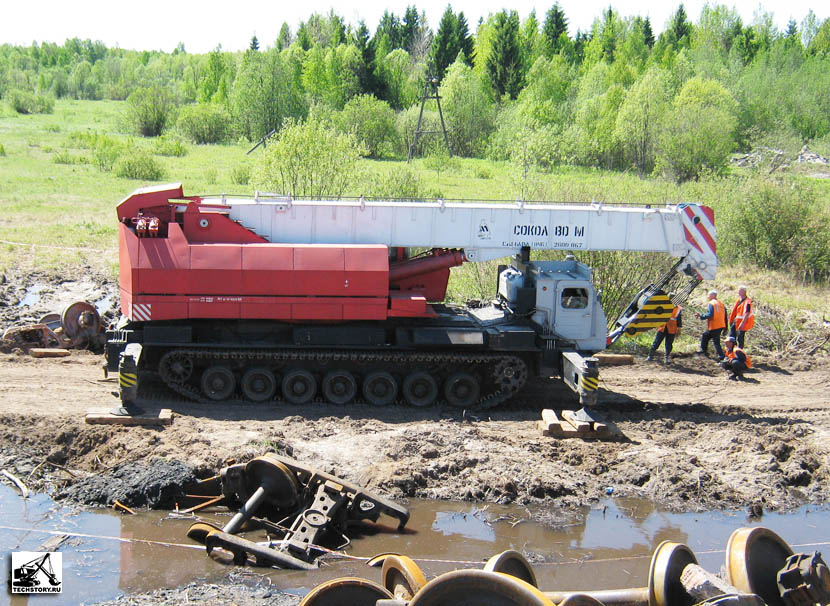 This MOC is ‘inspired’ but the Сокол-80M more than a real scale reproduction. 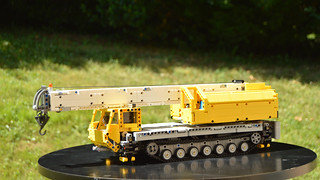 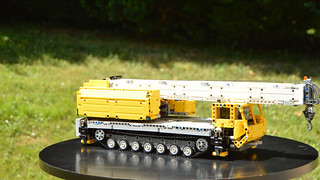 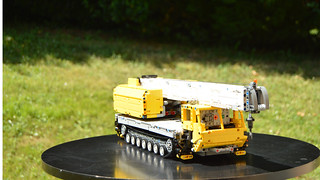 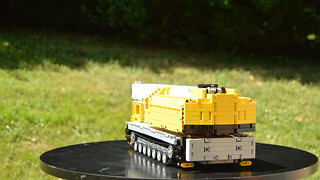 I still have the same dilemma about the scale to choose when starting a MOC. Here the two dimensioning part were the selection of the tracks (3l #3873 ou 5l #57518) and the dimension of the Telescopic mast. Telescopic mast only needs to have a single stage extension, so no need to have a big thing.

Choice has been made to build it in mid-scale rather than a large one. 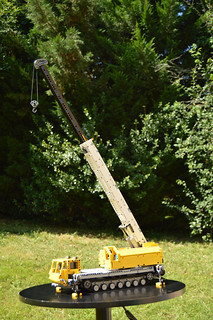 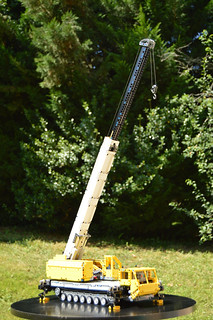 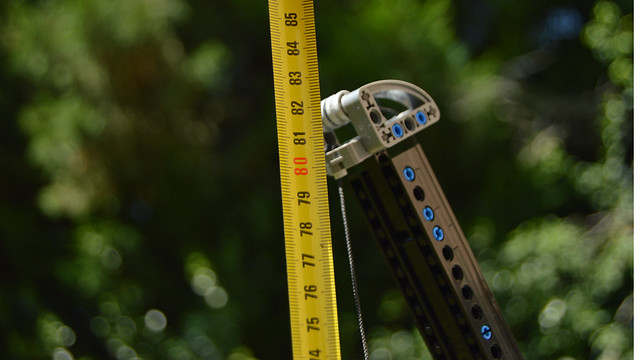 So, The transporter is mounted on two track (3l #3873) and equipped with deploying outriggers adapted from 42009 Mark II Mobile crane. I had to modify them in order to avoid clash with the tracks

There is 4 functions integrated in the transporter:

These functions are controlled by a SBrick and powered by a single rechargeable battery installed in the cabin. 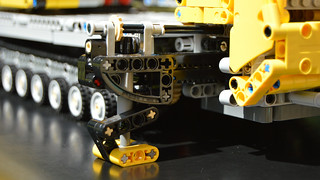 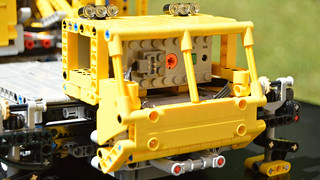 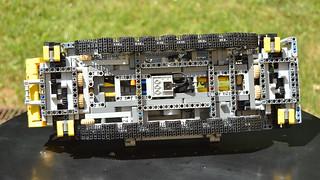 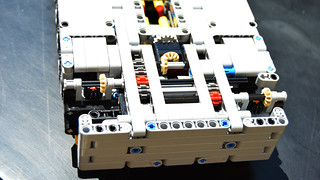 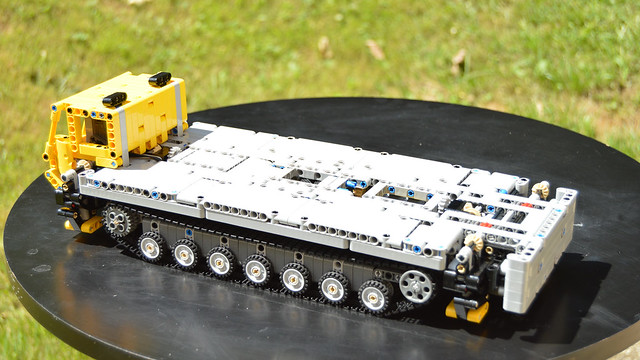 You should have noted that the crane superstructure is not installed on the picture above. There is no complex assembly under the turntable so it can be quick-released. It wasn’t planned but it appeared it simplified (a lot) the building process.

The superstructure supports the main mast which has a square section of 5×5 studs. Not the smallest I have done so far but it’s compact and stiff. It is of course telescopic with a single section extension using a short worm gear (ref 27938). I had to cheat a little to install the axle actuating the extension. Panel are 11 studs longbut 13L axle don’t exist so I had to use 12L. Not very clean but it do the work perfectly.

Main mast is erected (lol) using two linear actuator. Due to the gear reduction (PF-L > short worm gear > 20T > LA) it moves very slowly but it works. I would really love to see one day Linear actuator twice the length of the current ones. 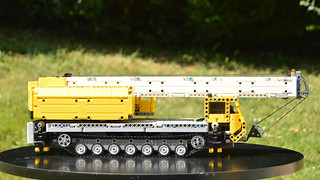 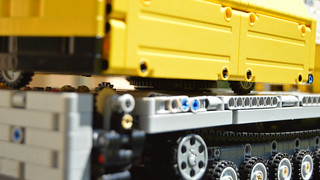 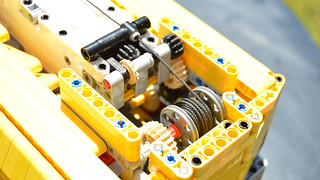 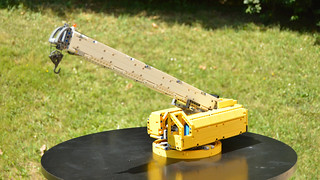 Superstructure is installed on a 60t turntable and integrates all the functions required to operate the crane:

These 4 functions are also operated through a dedicated SBrick powered by the battery. The only cable passing through the turntable is for the electrical alimentation 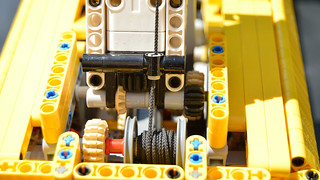 A technical point that was a bit difficult to thin and build: the rotation axle of the main mast is not directly above the turntable. I firstly think this would totally unbalance the whole structure, it is exactly what happen with the mast in lower position (it would happen with any type of structure anyway), but with the mast raised the superstructure balance itself and there is no need to have a counterweight (battery). 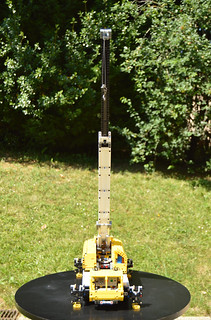 Good and to improve:

Good :
– It’s like a mobile crane but more badass. I can imagine that it could be a great inspiration for another crawler crane but with a personnal design*
– Each transporter and superstructure has its own Sbrick and can be controlled independently from the other. For example I can build another transporter and install the superstructure with no modification.

Could have been done better :
– The visual aspect of the transporter and the crane cabin are not really perfect. I won’t lie, reproduce real machine at a mid scale is still not my cup of tea.

What could be done better:
– Upscale it in order to accommodate 5L thread. Bigger, more space, more possibility.

Thank you for reading

* if you build your own, mention me in inspiration, I always appreciate it.

One thought on “Сокол-80M crawler crane.”