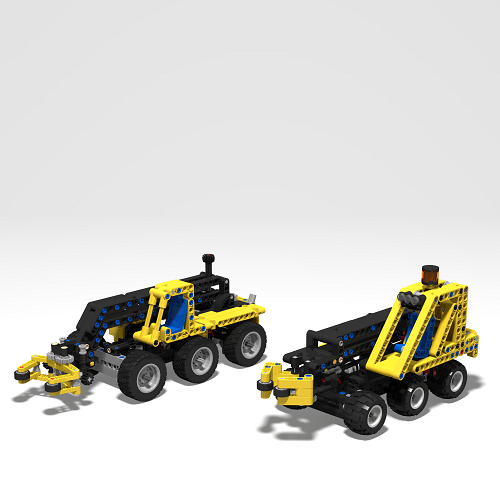 Back in 1994, Lego release the Universal Set “8062 with Storage Case”. It was a great glory time for Technic when Lego use to provide more than one instruction per set. And this one also had its own storage box-briefing case. A nice addition if you wanted to bring your Lego at work.
I’ve always been fascinated by this set, but unfortunately I never could never have it. I was 7 years old. 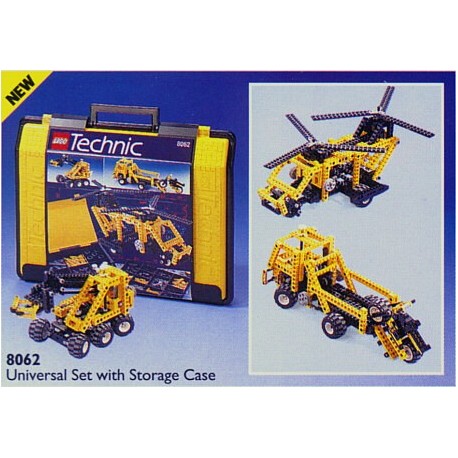 One of the 7 build from set 8062 was a claw-mounted vehicle. It has no official name I going to call it the grabber.
+I will not make or post funny joke about grabbing things as there might be some minors among us+

In the main lines, this is a 6-wheeler, 4 wheels steering via HOG, with an arm raised through a worm gear and the claw, controlled from the side of the vehicle.
I recommend you to visit the great and well documented Technicopedia website from Blackbird may you want to have additional info on all the models from 8062 set.

Two notes before we begin:
– There was no real goal behind this Grabber-Legacy project, I just really needed to make a break from power functions and build something “simple”.
– Both MOC were built on LDD first, and then assembled. That was interesting.

The first MOC is simply a studless rebuild version of the original model from 1994.

The design is exactly the same: 6 wheelers (same wheels of course) with a massive claw and a massive operator cabin. The only additions are the seat in the cabin and the working light above the cabin.

The functions are also exactly the same :
– 4 wheels steering through an HOG placed above the cabin
– Erection (lol) of the arm though a worm gear installed behind the cabin
– Operation of the claw trough a worm gear and universal joint controlled from the side of the vehicle

The studless version is a good tribute to the original model but is totally outdated in term of design and controls.
So this second version is made more with a 2018 standard.

The design has not really evolved except the cabin which is smaller and moved forward.
Yes it’s yellow, I guess TLG would have done it Lime of Dark Azure but I don’t have these colors at home.

It is still a 6 wheelers with 4 wheels steering, but the HOG control is in the middle of the vehicle.
The central axle has been connected to a 2-cylinder engine placed at the rear (for a counterweight purpose).

The main arm is now raised using a mini-LA. Movements are smoother and really more precise than with the old worm gear assembly.
And the control to open/close are now directly on the claw. It was not possible to install them somewhere else due to the mini LA and the motor.

Here’s a digital view of the mechanical parts:

Both MOC’s digital models are available for download* and you will be able in a few days to directly buy both MOC on MocHub.

Some people in the Technic community have a great talent when it comes to build C, D, … X, model of a set.
I really, like really, like to see again sets with more than one or two models. I really like to see The Lego Group takes the opportunity to work with their fanbase (instead of making clickbait video for youtube) to propose alternative build. Some sort of LEGO approved “Rebrickable” website with Lego-supervised instructions.
Great opportunity to people buying Lego to make more than the picture on the box, great opportunity for builder to share their work, great opportunity for TLG to have more model at a lower cost.

I guess we can dream.

Thank you for reading!