I am continuing to explore the fascinating world of the pipe transportation with a new prototype.

If you have a good memory, the first prototype had some limitation; in particular it couldn’t transport more than one pipe at once. If you want to refresh your memory you can find the post about this Pipe transporter here. 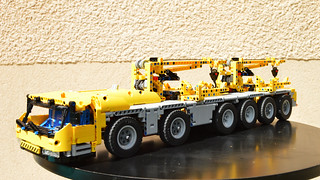 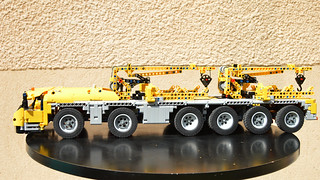 For this second iteration, I started again form a white sheet to try something new : The transporter is now on tire with multiple axle steering for a good maneuverability and good translation speed (more adapted to road). 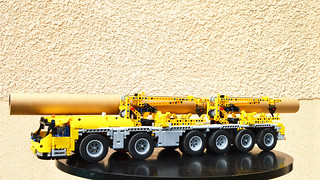 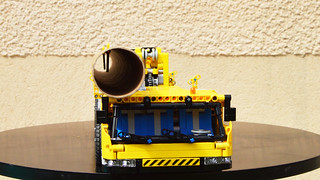 I had different option to built this porter that I detailed in an old Instagram post and I make the choice of keeping two cranes.

First advantage this allows making them smaller, as each crane support almost half of the weight of the pipe they don’t need to be reinforced and a mini actuator is enough to make them move. Second advantage is that the pipe remains horizontal even if not loaded exactly on its center of gravity. 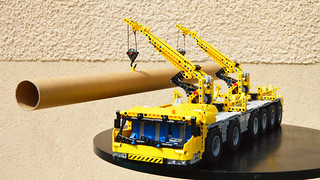 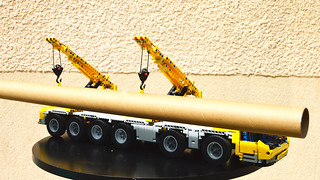 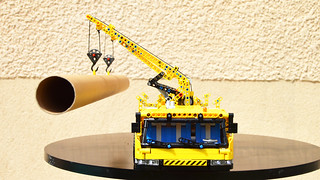 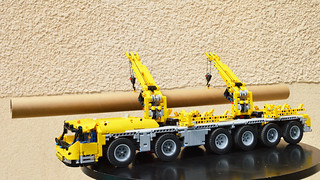 There is 6 functions in this truck.

Propulsion:
A PF-L motor with no reduction (20t/16t then 16t/20t) is used the drive axle 3 and 4. The speed of the truck is really good in straight line or when not loaded. However, acceleration is really bad when fully loaded and in a turn. A PF-XL should have been a better option. But there was not enough room to install one.

The steering:
Without any surprise some PF-Servo are used. One at each end of the truck, this way there is no need to have a single axle that run from front to end of the truck. 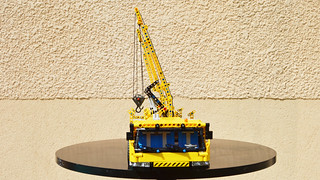 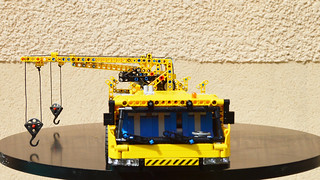 External supports
The 6th function is manual and provides additionnal support to transport up to 4 pipes. They can’t be loaded by the crane but a support vehicle can be used. 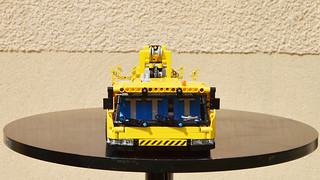 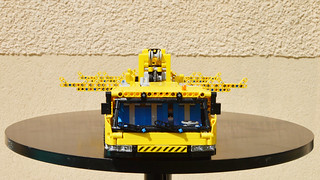 The truck was built from the center to the extremity, both crane are a copy-paste and are actuated by the same motors placed in the middle of the truck. Advantage: the crane move simultaneously and are always in the same position, drawback: you can’t use only one crane if you want to (I don’t know why you would have to use only one crane but well.)

This was a choice at the conception because the goal of this prototype was to test the concept. With an alternative built it would have been possible to upgrade the truck so each crane have its set of motor , and the simultaneous movement is manage through the software (because yes, SBrick allows you to control several ports with one command)

Good and not (compare to the first prototype):

Good
__ – Can transport more than one pipe
__ – Can load/unload up to two pipe in total autonomy
__ – No real length limitation
__ – Better road capabilities
Not good
__ – Still requires a manual intervention to catch the pipe
__ – Range of operation : Cranes are not long enough to load the additional support.
__ – The dual crane are still not independent.

Some improvement are still possible. So, project to be continued.

Thank you for reading 🙂