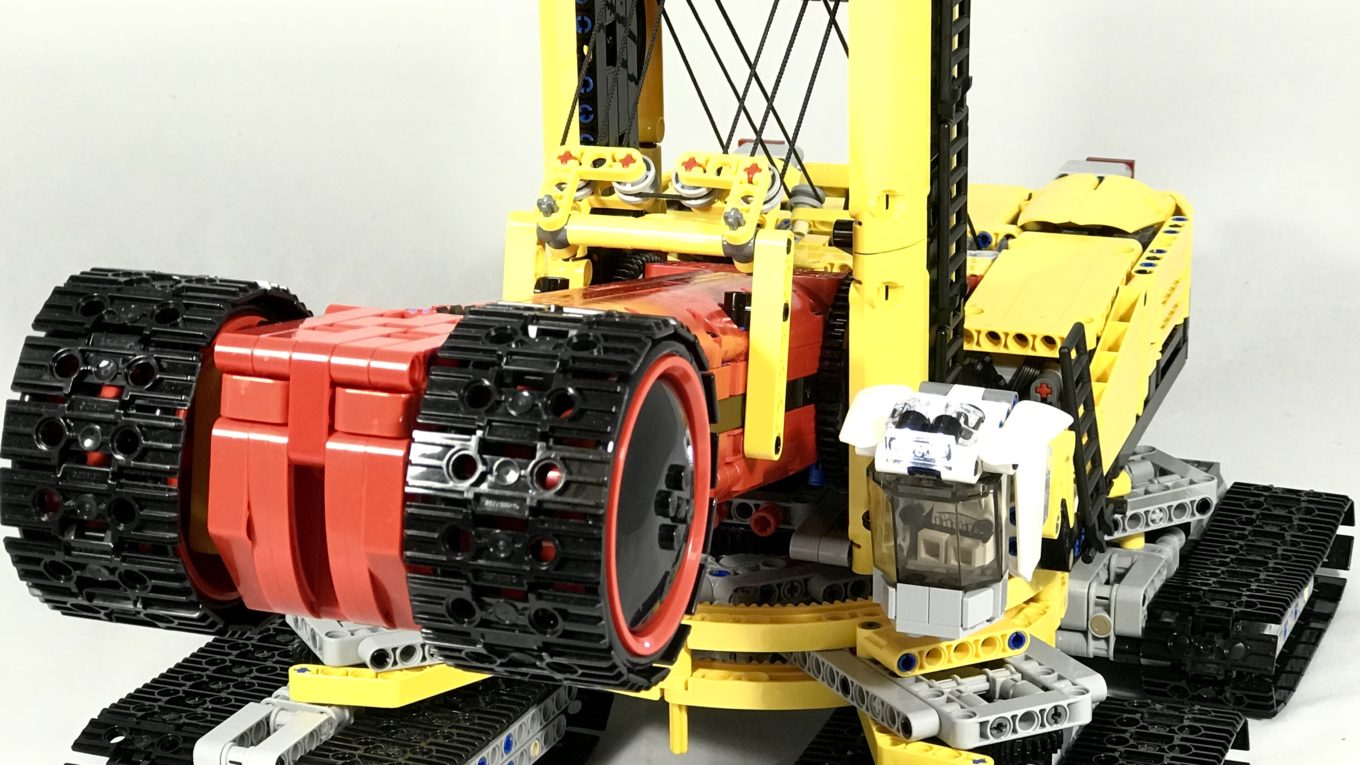 I discovered the last one in my local mall during my lunch break and immediately loved this big drilling machine called The Crusher.
It’s some sort of a hybrid between a tunnel drilling machine and a bucket wheel excavator. 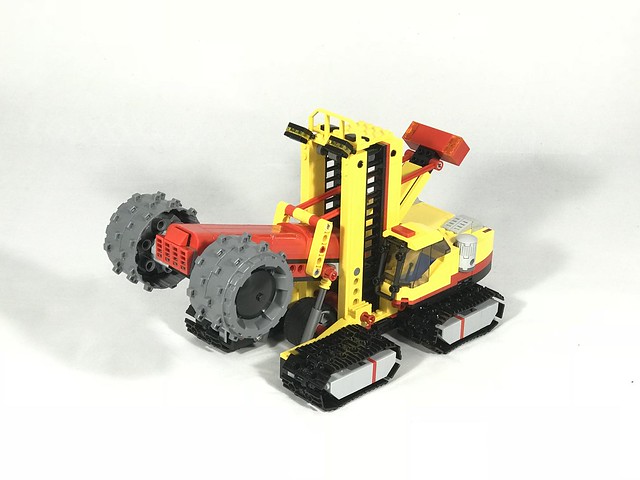 It is super cool. So I bought spare part from Bricklink to build it at home (I didn’t need the rest of the set).

I’m not a big fan of re-build/improve official lego set but a take one city set and #Makeitbigger in technic is surprisingly challenging. A good idea for a contest in my opinion. 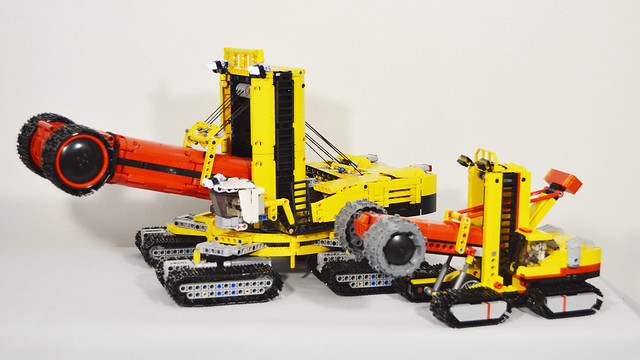 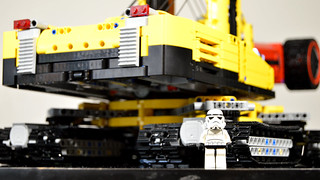 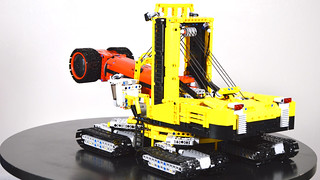 The Crusher XL’s MOC is not an exact upscale of the 60188’s Crusher, I built it like a “bigger” one, but still at minifig scale, with Bluetooth control through 2 SBricks and some power function elements:
– 1x Battery Box
– 6x PF-M Motors
– 2x PF-L Motors
– 5x PF-LEDs
– 3x 15cm cable extensions
– 1x 50cm cable extension

The main differences with the original model:
– The tracks are doubled and driven by a PF-M motor each. 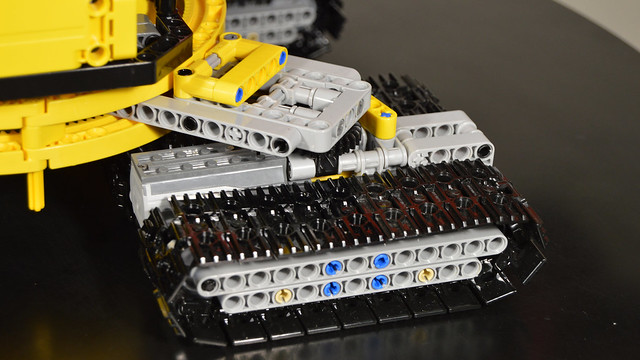 – It is composed of two parts. The lower part is the vehicle. It is built on a cross structure with track at each side. The 11×11 rack from set 42055 are reused to rigidify the assembly and support the upper superstructure. 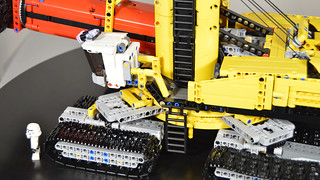 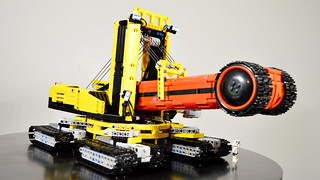 – The upper part is the superstructure. It can rotate nearly 300 degrees (the limitation is here to preserve the PF cable) and contains the electrical heart of the machine. The small PF-B battery box is place at the rear to be used as counterweight and completed with two boat weight (73090b); 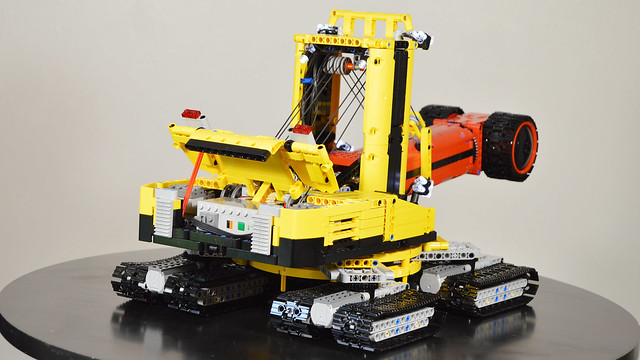 There is 4 motor and the 2 SBricks fitted in this little space to control the mains function.

– The cabin is a reuse of the 42055 set. It fits well to this model and defines the minifig scale of the vehicle. The position has been forwarded for the operator to have a better view.

– The arm is raised and lowered by cable actuated by a PF-M. A single cable is used between the two winches so it can accommodate the difference of position. 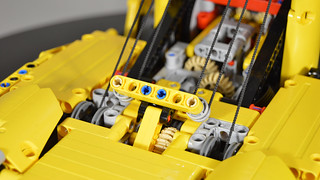 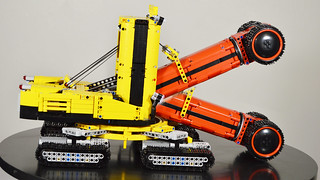 The reeving of the cable

– There is no moving counterweight (‘cause it is ugly)

– The drilling head can tilt. It is mounted on a turn table and can turn to 360 degrees. The turntable is old and jam a little so the movement is not very smooth. Both drilling and tilting function are powered by a PF-L motor each. 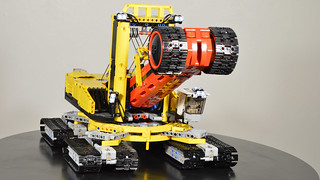 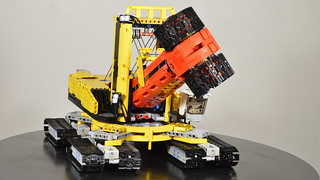 There are some points I initially wanted to include in this MOC but they wouldn’t have fitted in this scale. So I keep them in mind if one day I decide to build a Mk.2 :

– 360 degree rotating track instead of a rotating superstructure: the challenge here was to find a means to control each 4 tracks separately (see picture below)

– Telescopic arm: why not ?

Thank you for reading 🙂