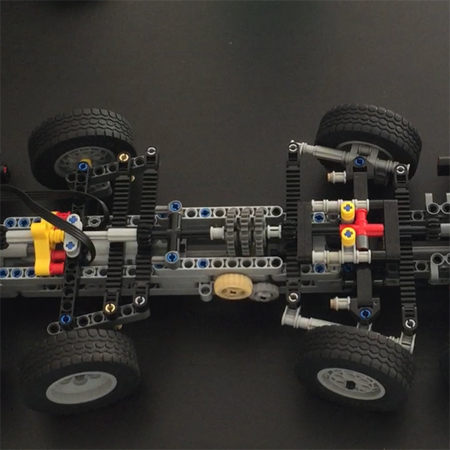 This small movie is a series of functional tests done in order to find a proper way to build a multi-steering mode vehicle. It was only prototyping and testing but the final goal is to integrated this system in a mobile crane or a mobile platform (remember this ?)

A reminder about differential to understand the purpose of tests 1 and 2:
There are 3 actions possible on the differential, move input 1, move input 2 or move the frame. The major issue here is the lot of floats in the gear, so the wheels are never straight, an never come back to a zero degree angle (may be maybe solved with rubber band).

The steering mode possible :
Mode 1 : PF-SM1 on + PF-SM2 off : Normal steering (axle 4 is ½ of axle 5; axle 3 is ½ of axle 4 etc)
Mode 2 : PF-SM1 + PF-SM2 in same direction : crab steering
Mode 3 : PF-SM1 on + PF-SM2 in opposite direction: short turn steering.
This conception is really better than the previous one: more mode possible, but the major issue here is the misalignment of the axle 2 and 4 due to the gear shift. So it’s perfect for a 3 axle vehicle but not for more.

This third test has been made late compared to the previous one, and the conception is totally different. Exit the differential and the Servomotor.
The concept here is to have a unique actuator to move all the axles, but the axles support a dual configuration.

The rotation is done by a Worm/24t, the change of mode is done through a liear actuator.

It works better than the previous one, it’s lighter to install, it’s more precise, but it’s a little slow.

One thought on “The multi-steering-mode-thing”