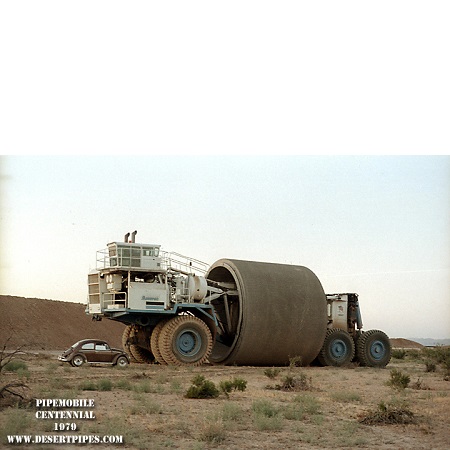 Let’s make a jump in history.

Back in the 70’s the USA started the Central Arizona Project, a series of canals built to bring water from the Colorado River to irrigate the desert. Wherever the canals had to cross a river or major wash, they put in monster cement pipes.
Pipemobile was the vehicle specially built to transport those pipe from the factory to their final position.

The gigantic pipe in the desert eventually became a super hype spot for skateboard. If you’d like more information about this project, I encourage you to visit www.desertpipes.com/ where you will learn more about the history of Central Arizona Project and the joy of skating these pipe. 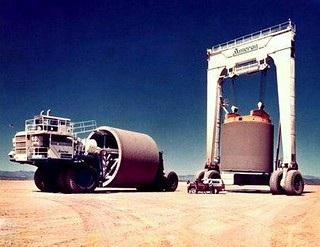 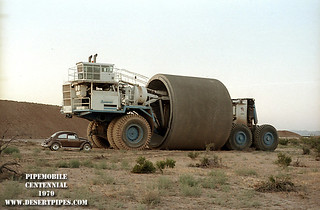 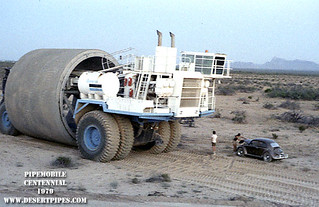 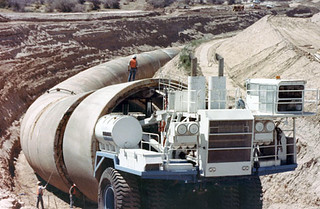 Back to the Lego.

There were at least two versions of the Pipemobile, but I will focus on the 1976 version depicted in the video above. I have for now zero technical information about the real machine, but… well I like it.

It has a narrow tandem rear axle able to lift to enter the pipe, so the main body of the vehicle is actually in the pipe during transportation.
It seems that only the forward axle is used for steering and propulsion.
And the technic used to lift the pipe is a big mystery. Adjustable suspension? Jack on the bodyframe?

Hypothesis and issues.
Actually, I do not anticipate any big issue except to have a very compact system so the truck can fit inside a pipe.
The use of Gear Rack 1/4 Circle 11X11 introduce by the great Bucket Wheel Excavator would make a perfect big pipe. And are approximately at scale for the weels.
There would be 5 function to pilot in the vehicle : Propulsion; steering; lift/lower the pipe; lift/lower axle 2; lift/lower axle 3.

A friendly Reminder: This is just idea for future construction; it doesn’t mean they WILL be built. However, if you like this idea and want to build it before I do, no problem, but I would appreciate if you can link this site as inspiration 🙂